Things You Should Never Say To Someone With Autism

February 28, 2019
There are some things you should not say to someone with autism. Sometimes we mean well, but these phrases can actually do more harm than good. Not all autistic people are the same. Different people will have different traits/habits with their autism. I will address the phrases that were said me to as well. Sometimes people don't know any better. Some people are just outright ignorant. When it comes to a disorder like autism, it's unpredictable as to how your aspie will be affected. The doctor who diagnosed your aspie may not know how your aspie will be affected. All he can do is tell you possibilities 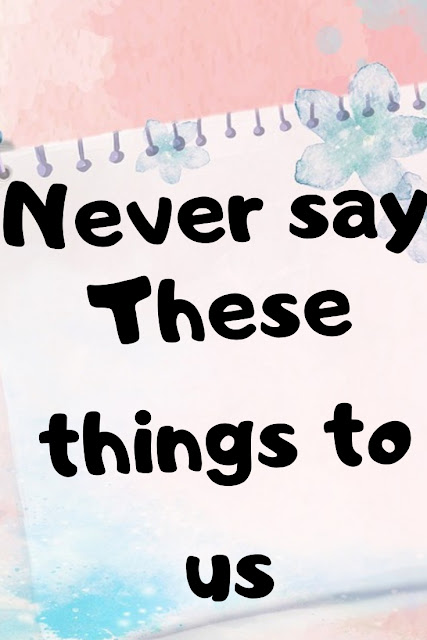 I don't know about you, but I hate being compared to someone else who has different circumstances than me.

You Should Not Tell The Aspie That They Don't 'Look' Autistic
My friend actually said this when I told her I was autistic, why does everyone think autism has a look? If you google people with autism, they will look like regular folks, right? Autism is not like Down Syndrome for the love of God. Not everything has a look for crying out loud! Let me ask you a question, what is autism suppose to look like? Are we suppose to have a mole? Think about it. What do you expect an autistic person to look like? Not all disabilities are visible. I think because you can see someone has Down Syndrom, people assume autism is the same way. Down Syndrome is a genetic disorder as a result of a defect in chromosome development if I am not wrong. Autism is a neurological disorder. 2 different disorders caused by 2 different things! It's the same principles of telling a sick person that they don't 'look' sick. I remember when I was 16 I had an issue where I could not hold down my food and it affected my performance at band camp and the director say that I looked fine' and he started to think 'that it's an act.' I hate to be brutal but you're ignorant if you don't think someone is sick because they look fine to you.

You Should Not Judge The Person On Your Standards
You may not be familiar with this reason but I added it to get a message across. When I went through a process that I thought would help me find a job, they helped people with disabilities with employment. It was unclear as to what disabilities they work with. A counselor told me that I was not autistic because of how I talk. I can't tell if she is that stupid or not good at her job. In all seriousness, what kind of reason is that? That lady had no right to invalidate my autism. Especially since she is not a therapist or anyone who knows about neurological disorders. Girls present different autism symptoms than boys. Girls can subconsciously 'mask' their autism. Thus it's hard for some people to believe our autism. That could be why. Maybe she had more male clients and judged me from her male clients. She was wrong regardless. Not everyone will have the same struggles. Autism does not affect your intelligence, it just affects how you learn and how you see things. For example, the person may learn better if they can see the action rather than you talking. Or they can filter information given in chunks. You cannot lump everyone together when it comes to a wide ranged disorder like autism. This is often assumed, that if the person is smart, they're not autistic. This is not true. Same with dyslexia, you can't assume the person is not dyslexic because they can read. They could just struggle with certain words. I follow a Youtuber with dyslexia, sometimes she can spell her words alright, sometimes she can't. She may have to have someone proofread her stuff for her. You don't know what happens behind closed doors.

You Shouldn't Say There Are People WIth Autism Who Work

It's true that autistic adults struggle with employment. Whether it be finding/getting a job or keeping it. You should not assume that just because the small % of autistic adults that work and hold their jobs that everyone is like this. If all of us can get or keep a job the unemployment for us wouldn't be over 80%. There need to be more jobs for us. We struggle in a neurotypical workforce. Sometimes we can't get SSI because we're judged because of the small % of us who are able to work. And because we don't have physical limitations that can affect performing a job.  Maybe the small percentage found a job that fits them. That doesn't mean the job in question fits us. Neurotypicals don't have the issues that we have with employment. Therefore the workplace is more for them than us. Most companies care more about how fast you are than quality.

You Should Not Assume All Of Us Are Good At Math, Computers

I was horrible at math, it was so hard and confusing. I was lucky to pass with a D. I have some computer skills that someone else may not have. We're all different even though we have the same disorder. A store can carry the same flavor ice cream but by a different company. Not everyone is going to like X company's ice cream. So don't assume ALL of us is going to have a particular skill.

You Should Not Invalidate Someone For Having Different Struggles Than You

We are going to have different struggles. That doesn't mean our issues do not exist. I made a video on why I hated being autistic and shared it to Steemit. This guy invalidates my feelings and thinks they don't matter because he didn't struggle like I did. This is the one things you should never do to anyone. NEVER invalidate someone because you're not familiar with their struggles. He claimed my struggles 'had nothing to do with autism' because he is lucky and didn't struggle with getting a job or didn't get bullied in school etc. This is why we struggle because of people like him.

Remember, autism in unpredictable as to how the person will be affected. Even the doctor who diagnoses you will not know right off the bat. They know the traits associated with autism, they will NOT know how YOUR kid will be affected.

Everything doesn't have a look. How should a chronically ill person 'look?' Do you understand how stupid it sounds when you tell someone they don't LOOK autistic?

I understand sometimes the person may not have much education on your disorder. If they refuse to learn then you can't control that. Make it easier for us, don't make it harder.
.