Sometimes I Hate Being Different

April 17, 2019
I am going to admit that I hate being different. I hate seeing the world in black and white. I hate feeling like people are speaking another language because they teach by talking or explain how I don't understand. I wish I could not have autism. I did the autism now tag where I answer some questions. You can watch the video here. I went on a rant at the end about hating being autistic at the last question, though I share this video as this is where it started. I don't understand some jokes, I don't understand sarcasm from seriousness. What's to like about feeling different from others? Update, I moved back to my Aaliyah Holt channel, so visit that one. 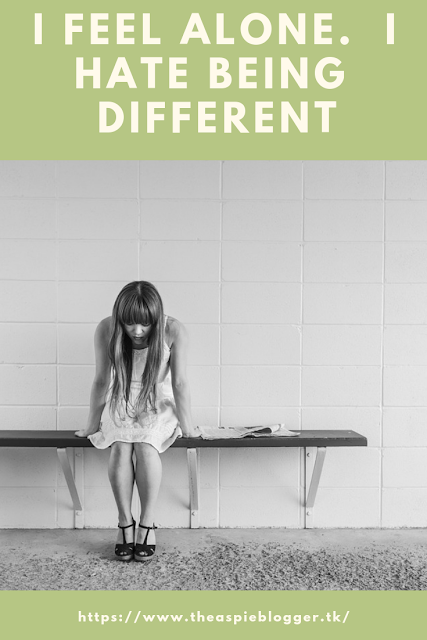 You are the scum of the earth if you treat anyone with a disability, not just autistic people, like crap. I don't know if I had offended someone until it's too late. It's not my fault my disorder compromises my social skills! It's just hard to know what's Ok to say or not. It's like playing chess while socializing and if I offend them I got checkmated. I feel like a jerk sometimes.

I'm unemployed due to my autism. I explained in a blog post how autism complicates my ability to work. It would be nice to be able to have my own money to buy what I want or save up for what I want. That would be the best thing ever. Heck, it would be nice to make some friends and hang out. It's no fun having sensory limitations. It's no fun needing to see things to understand. I decided to build my crypto blogs. I can make up to 1K on those blogs vs a crap min wage job where I wouldn't make enough to buy an Xbox.

I honestly don't see what's there to like being ridiculed because you don't see things the same way as everyone else.
I suck at adulting, I really suck at it. When something is new to me, I just don't know what to do. I feel as though my mom child shames me for it. I didn't ask to be blind in this world.

I was hated when I was in Jr. High and Highschool for being different. Kids I never even seen before hated me all of a sudden. They didn't wanna get to know me and instead listened to someone else's opinion. The only time where someone got to know me themselves is when I went to a Catholic school. These girls hated me, they told this other girl bad stuff about me and she didn't believe them and choose to get to know me herself instead of overhearing someone else's opinion. She talked to me while we were on a field trip to a play. Others just jumped the bandwagon. I just didn't fit in at that school. It was a Catholic school. I'm Christian. We don't have the same beliefs. I was a little fish in an ocean full of sharks.

It's no fun being called names by the neurotypicals because you don't understand their language.
I feel like this world is not for me. I feel like I do not belong here.

I feel as though my mom doesn't see my struggles


It seems like since I turned 18, she thinks my problems went away when they didn't. It took a while for me to get my mom to understand that working from home is better for me. I feel better when I am in control. I felt that my mom disagreed at first because she doesn't understand what goes on in my head. I'd feel like a windup doll having to go into a job, being told what to do, etc vs if I have control over my schedule. When I'm in control, I can rip up the windup crank and step on it. Some people just don't have the mental capacity to handle some things.

I feel as though I don't have an outlet like I used to. I haven't seen a therapist since June or July due to leaving that sorry excuse for a 'doctor' I was given after my old doctor left.

Which is why I blog because I feel it's my only outlet. I think if I was normal everything would be OK.

As of April 2019, I am back to my old doctor. There was an error and they thought I have a plan they didn't accept.

I went down south with my grandpa and I felt freer. It may have been in the middle of nowhere. It's quieter. Fewer people. a good % of my folks are there. That is what I need. Not a job where I would not have the freedom to do these things. Even if I have to save up my crypto earnings to fund future travels, I'll do it.

Also, running one blog is easier for me so I am merging articles I had on my 'gamerartist' blog onto this one just so you know. It would cost too much money hosting 2 blogs. Thanks for understanding.