I Quit Band Because Of Anxiety

May 28, 2019
It's pretty common for people to end up quitting something they love due to mental health reasons or just health reasons in general. I actually liked being in the band when I was in school. I got interested in music in the 4th grade when the fine arts teacher took us downtown to see the symphony and I liked it. The teacher showed us classical music and I found it neat. I wanted to do the band. Unfortunately, the lessons were not during school hours. So I had to wait until Jr. High. At least I was closer to my Jr. High School and I can walk home or someone can meet me if I needed to stay after school. 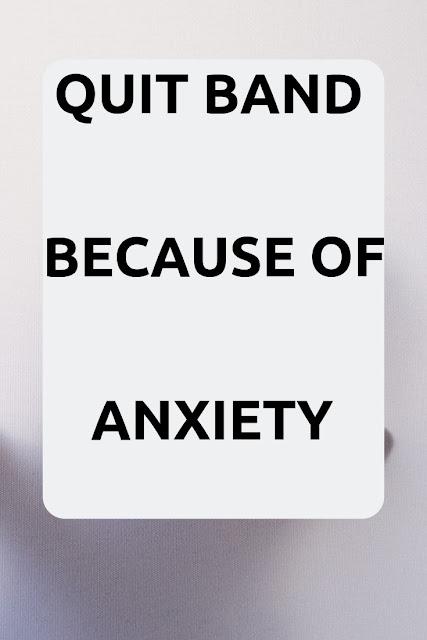 I have a crippling fear of playing for people by myself. I even freaked out over section solos in the piece(s) that we played. There were times where my mom's ex-boyfriend asked me to play for him and I said no because I was too afraid to do so. I feel my anxiety could have been a reason for this. People told me I was bad because my nervousness caused me to miss some notes. Also, I was rusty since I didn't practice for the summer when school was out. Yeah I know, it's a sin in the music world. When I was in Jr. High, I practiced in my closet because I didn't want anyone to hear me. I didn't want the neighbors to hear me. I don't know how they would have felt living next door to a musician. I lived in an apartment with thin walls. Sound travels. Explained my science. When I got to high school was my downfall. I saw that the high school band was the real deal. I was not prepared for this. Solos and auditions were my fears. We had to do auditions for chair placement once marching band ending. I was terrified at my audition and caused me to do badly when I could have done well if my nerves didn't get in the way.

Participating in the Solo and Ensemble thing was required in high school, in Jr. High, it was optional and I didn't participate. I had to do a solo during my sophomore year because no one wanted to be my partner.  I was so terrified of doing a solo. I had no other option since everyone else was already grouped up. I couldn't make it to the school where the contest was held, so I made it up with the teacher when he was available. At least the teacher wasn't as harsh as a judge would be.
My jr. year I did a duet with a girl I sat next to. I BOMBED IT. My heart was racing and I was shaking from being so nervous an anxious. I get it, anyone would get nervous before performing. My anxiety for performing was BAD.

This is like a contest but for musicians. If you're a dancer and you partake in a dance contest where judges will rate your performance, think of the solo and ensemble like that. The director, the next day, when I went to hang out in the band room during lunch, was brutally honest and told me the judge said I did terribly. I took the harsh feedback to heart and decided to quit the band to avoid solo and ensemble. Before you pull the I can't take criticism card, telling someone they are bad isn't constructive feedback. If the judge had of made notes on what I need to practice ( eg practice your timing), and the director said hey let's work on what the judges pointed out, that would have been constructive criticism. People have the misconception on what criticism is.

I took a guitar glass my Senor year and the teach would teach us a song and we have to play it for him. Yeah, I was scared to death of that, too. Fear. I let fear take over. And fear won. It was like a battle and I always lose. What person plays an instrument and is terrified to perform for people? Do you think this is embarrassing? I am always influenced by certain things. Now, you know I am a hardcore gamer. I love video games and gaming music.

Let me get into how this relates, alright? You know how games have soundtracks and people do covers of it? Or a movie's soundtrack. Most people who do cover songs post it on YouTube and will link it in a group related to the game, movie, etc. I would love to do covers, but I am too afraid of people thinking I will be bad.

I am also the type to not wanna try if it's too hard. When my friend told me learning the piano is very hard, I said f*k it and didn't wanna learn. I also made a poorly thought out video on this topic.
'I shared this video in a group on Facebook only to have people invalidate my feeling just because this was in school and I wasn't in music professionally. You should not invalidate someone just because you don't understand why they're upset or because they didn't sing, dance, etc majorly. I may start playing again at some point in the future. If I do. I won't play for anyone.