An Open Letter To A Person I Admire

August 27, 2019
This is an open letter to a person I admire. I will have small subliminal hints since I get ridiculed for admiring someone.  I'm usually quiet about who I admire and out myself. Is this normal?

Please excuse me, I am socially anxious. I am moving this from a different blog. I used to have 2 but 2 blogs is way too many.

Is it normal to write a cryptic letter to a celebrity? 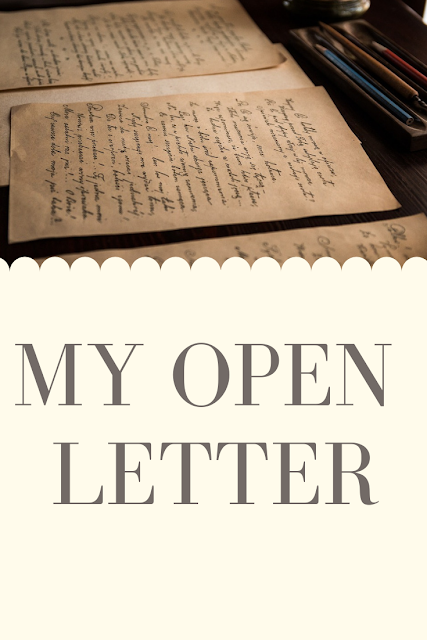 This is me saying in a subliminal way how Undertale gave me the things I rarely/never had. I felt as though my 9th-10th grade year of high school was rough and my 6th-grade year of Jr. High was rough.

I've struggled to make friends due to my autism/ADHD when I was in jr. high/high school. ( Sorry don't mean to get too personal here. I know I am a weirdo stranger on the internet).

I got deeply depressed when yet another person left me presumably due to my mental health and isolating myself from people.

I decided to play Undertale on my YouTube channel to kick off my gaming channel I am open to playing different games on my channel.

Undertale cured my depression of people leaving me for a mental illness I never wanted.  *cough.*

I had come out about this(Undertale helping my select depression)  before on an Undertale Reddit and the people there were mature. I came out again in an Undertale group on Facebook and was attacked by someone on the thread. I ended up blocking them because they think they can treat people how they want. Paraphrasing what they said.

Now, here's the thing. While when I was in school I rarely had people who accepted me for who I am. Undertale gave me the acceptance I rarely had. An artist makes art of their own interpretation, people who make AUs tell their own story. People come up with their own theories about things in Undertale. People to get express their creativity with art, music covers, theories, Aus.

When Sans tells me in the game someone cares about me, It reminded me of when I was in the 9th grade and though so hard about ending it all, due to the constant bullying I faced. How my friends did everything they can to make sure I was alright.

When Undyne tells Alphys that she doesn't have to lie about what she liked, that Undyne didn't really care about what Alphys liked.

Undnye hates you at first. In A funny away Papyrus gets her to give you a chance. And she ends up liking you. Even though I was rarely given a chance at school. I was glad to be given one in such a wonderful game. See Undertale tells you don't judge someone actually gives them a shot first.

When I shared a post to my Facebook that concerned some friends I met on a Sans page I run, (they thought I'd have an eating disorder, I had one when I was in the 11th grade) someone felt worried and gathered everyone in a chat saying someone here is down about themselves and needed the other peeps. When Sponge Bob gets his driver's license is the day I'd ever have that happen with people I know personally since being out of school.

No other game cured my select depression-like Undertale did. I have also had some depressive episodes and the wonderful people I met on the Sans page came in and left some encouraging words. My so-called 'personal' friends just scroll past my posts.

In Undertale no one is judged for being different. If the kids at my school took a page from Undertale's book my life wouldn't as been as hellish. Even though UT didn't come out until 2015 and I graduated in 2014.

Well, better close this before it gets any more awkward.