September 12, 2019
I hoped you packed your tissues. You're going to need them for this. I will be talking about the saddest songs in Undertale. These songs are sad in my opinion. Feel free to tell me which song(s) you think is sad. I honestly think Undertale is an amazing game with an amazing OST. However, the game does a good job hitting you in the feels, for sure. Here is a good try not to cry challenge (there is a video version). You cry you lose. 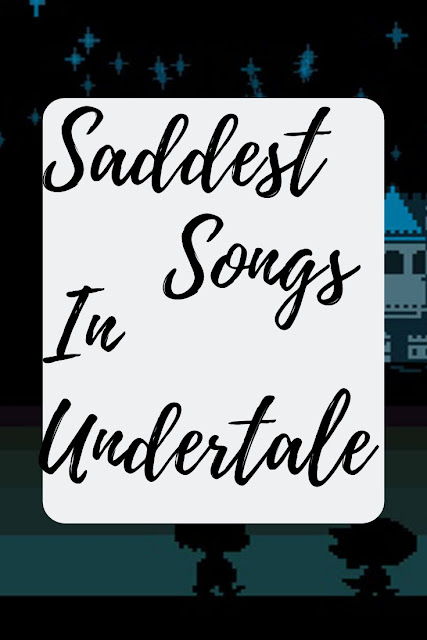 His Theme, omg this song puts you on a feels train. You will hear this track later on in the Asriel fight. After you save your friends from him. If there was a try not to cry challenge and this song comes on, how many of you would lose? Why does such a beautiful game have such emotional songs? The song kinda adds to the emotion of the part of the game for sure. Undertale is deeper than you think once you really dig into it. Once Azzy downgrades to his normal form the game is just an emotional roller coaster. You learn that the name you choose for the fallen human is NOT the person you're playing as. You are naming the first human who fell into the underground who is canonly named 'Chara.'

Last Goodbye, this is the second saddest song in the game's soundtrack to me. You think the song will be upbeat because of how it starts. Just wait until about 45 seconds in. Boy was I wrong! Those dang solo parts in the song hit you like a freight train. Or a truck. Or bus. I think if this song was in a try not to cry challenge the solo parts will make you lose. I think I would lose lol. There is an interesting fact about those solo parts, fam. I didn't know this myself until recently. I never knew this when I first played the game in 2017. I am mad no one told me this! Why didn't anyone tell me? I made the meme format for some dramatic effect.

I have a video where I do some funny reactions to some of the songs.

Here is a timeline when hearing the solo parts
2017( when I didn't know) hum, this sounds amazing, what could it be?
2018(when I did find out) Jazz.exe has stopped working.

I remember saying I never heard him play anything. I did but I didn't know. If that makes sense.


Undertale, you hear this song when you enter the New Home area and learn about the first fallen human. When you walk into that basement. The song gets super sad. It took me so much preparing to make a video and write this blog. The song is called 'Undertale,' why? I never understood this. This adds to the emotion of the sad story of the first human who is named 'Chara.' Their gender is up to you I think. Chara is a girl to me. Her and Asriel's story is just too sad.

For The Fans, This one plays after you have beaten MTT in a pacifist run. This song plays before he runs out of battery. This reminds you of your favorite TV show ending. I wish TV shows can last forever. All things must end. I mean, it reminds me of the series finale of a good show and you're upset it's ending. All the good shows Disney and Nickelodeon ended, I miss them so much! And this was MTT series finale of his show, and people did not want his show to end.

Song That Plays When You Beat Flowey, you hear this song after you have beaten Omega Flowey and Sans calls you and leaves a message when you don't answer. The song can be sad depending on what neutral ending you get. One very emotional ending is when you kill everyone except Papyrus and Sans tells him they are on vacation and Papyrus is waiting for them to come back. This song adds to the emotion. Another sad ending is when MTT is killed and Alphys presumably commits suicide. Sans hints at this when he mentions Alphys' disappearance and Undyne says that she couldn't help her. This is a deep game! Alphys even hints at this in the True Lab when she mentioned doing 'something cowardly.'


Undyne gets depressed and loses her job and her home. This game does a good job teaching you a lesson on how your actions affect someone else.

Memory, This song is heard a few times in the game. You can play it when you put the umbrella over the Asriel statue. What does this song remind you of?


The song that Plays When Leaving Toriel,

Tori doesn't want you to leave but she knows she has to let you out of the nest. Tori loves Frisk like her own child.
I also made a video on this topic. You can check that out if you want to.

Which song do you think is sad and why? I'd love to hear your intake!